Known as the "city of salt and sailing" or "city of the two seas", Trapani is profoundly tied to the sea. Developed on a crescent-shaped strip of land, bordered by the sea on three sides, Trapani is rooted in ancient mythology.

Legend narrates that the city was born from a sickle that fell from the hands of Saturn (or Ceres) that is the traditional protector of the city. The name of Drepanon (scythe in Greek), today Trapani, is the result of this legend.

Useful information for your stay in Trapani

From Palermo and other Sicilian cities: AST
From Agrigento and Sciacca : Autolinee Lumia
From Naples – Rome – Salerno : Salemi

Palermo Punta Raisi “Falcone Borsellino” Airport via A29 and E90

Erice: From the port of Trapani you can reach the city centre of Erice in just a few minutes with the Cabinovia Trapani-Erice (Click here to see the Timetable)

How to reach Trapani

It is likely that the city was founded by the Elymians, the people of prehistoric times, who had their main town in the nearby Erice using Trapani as a trading port.
Trapani has experienced a strong Punic influence with their arrival in the nearby Phoenician Motya in the 8th century BC, the Saline di Nubia (salinas of Nubia) witnesses of the activities of this population. It is also at this time in which the first Colombaia (castle) settlement was built at the behest of the Carthaginian leader Hamilcar Barca.

The long Roman rule began in 241 BC, followed by the presence of the Vandals and the Byzantines, up to the cultural renaissance with the conquest of the Arabs in 827. Many traces of this domination remain in the local culture, from architecture, to the cuisine, literature and language.
The Normans arrived in the Trapani area in 1097 and continued to develop the city, in particular, giving the port its former glory through trade and the crusades. The port of Trapani thus became one of the most important in the Mediterranean and the principal maritime cities, such as Venice, Genoa and Pisa, all had a consulate in Trapani. During this period, Swabian and Angivian conquests alternated, until the expulsion of the French during the Sicilian Vespers in 1282.

During the 14th and 15th centuries, Trapani became the most important economic and political centres of western Sicily.
The Bourbon Kingdom of the Two Sicilies began in 1738, after a brief period of the Savoy and Austrian, until the deployment of Trapani, in 1861, for Italy’s unification.

What to do in Trapani?

The historic city centre, closed to traffic to allow the visit the city in peace, is considered the "living room" of Trapani for its numerous historic buildings, in Baroque or Liberty style, and the churches of great cultural interest that can be admired in the area. Walking along Corso Vittorio Emanuele, the ancient lodge, via Torrearsa and via Garibaldi, you can admire several historic buildings including the most noteworthy baroque Palazzo Cavarretta (1672), Palazzo Riccio di Morana, Palazzo San Rocco and Palazzo Lucatelli. Palazzo D'Ali, Palazzo delle Poste, il Villino Nasi, and Palazzo Ciambra or Giudecca are also very beautiful.

The old fish market, in Piazza Mercato del Pesce, is also highly interesting and features a fountain that represents the Anadyomene Venus.

The manufacture of coral, developed in the city around the 15th century, is another special feature of this Trapani. Although this art has practically disappeared today, and only a few people remain who practice the working of coral in Trapani, some works of the Trapani master coral artisans can still be seen at the Pepoli Museum.
For a refreshing walk amidst the greenery of Trapani, you can go to the public garden Villa Margherita, named in honour of the first Queen of Italy.

The numerous monuments of Trapani represent fascinating witnesses of the rich cultural history of the place. The intense religious presence is seen with the many churches and convents in the city:

Cattedrale di San Lorenzo (Saint Lawrence Cathedral), in Corso Vittorio Emanuele, was built in 1421 by the will of Alfonso the Magnanimous, but owes its present appearance to the 18th century restoration carried out by Trapani architect and theologian Giovanni Biagio Amico. Featuring a Baroque architecture, it preserves many works including a crucifixion attributed to Antoon Van Dyck and a marble sculpture depicting the Dead Christ by Giacomo Tartaglia.

The Chiesa Santa Maria del Soccorso (church), also called Badia Nuova, is one of the oldest churches of the city. Overlooking via Garibaldi, its construction dates back to the Byzantine era, in the year 536, at the behest of General Belisarius. With the complete rebuilding of the monument in 1640, a monastery was built next to the Church for the Dominican nuns of Santa Caterina (Saint Catherine). The inside is decorated in true Sicilian Baroque and the floorings are decorated with polychrome marble inlays.

The Chiesa di San Domenico (Church of Saint Dominick), in San Domenico Square, built in the 12th century at the behest of James of Aragon and with the hands of the Dominican fathers, houses the tomb of Prince Manfred, twelve-year-old son of Frederick II and the burials of the Kings of Navarre, Theobald and Isabella. The Church of San Domenico preserves a 13th century wooden crucifix believed miraculous by worshipers.

The Chiesa delle Anime del Purgatorio (Church of the Souls in Purgatory), in Piazzetta Purgatorio, built in 1688, preserves the twenty Sacred Groups of the Misteri di Trapani (Mysteries of Trapani). Being a representation of the death and passion of Christ, the oldest among these carvings were made by Trapani artisans in the early 11th century. The uniqueness of these statues is due to the fact that the artists that made them were mostly inspired by the apocryphal Gospels adding personal interpretations.
The façade is characterised by twelve stucco statues depicting the Apostles made by Alberto Orlando.

There is also the Santuario dell'Annunziata (Shrine of the Annunciation) with its Baroque bell tower.

On an artistic and historical level, Trapani is the site of four very interesting museums:

Pepoli Regional Museum, located in the old convent of the Carmelite Fathers, dating back to the 14th century.

For an overview of the history of the city, you can visit the only external fortified building of the city: the Castle of Colombaia. The three 16th-century ramparts (Bastion of the Impossible, Conch Bastion and Imperial Bastion) and the Mura di Tramontana (Tramontana Walls).

Trapani is not only a city of art and history, yet it stands on a land rich in landscapes and special features. The Riserva Naturale Orientata Saline of Trapani and Paceco (Controlled Nature Reserve Salinas of Trapani and Paceco), just a few minutes from the city, is a must see for the details that it offers visitors with its windmills and white salt heaps and whites and due to its rich flora and fauna. For information on the centuries-old art of salt mining, it is worth visiting the Museo del Sale (salt Museum), housed in an old salt warehouse. 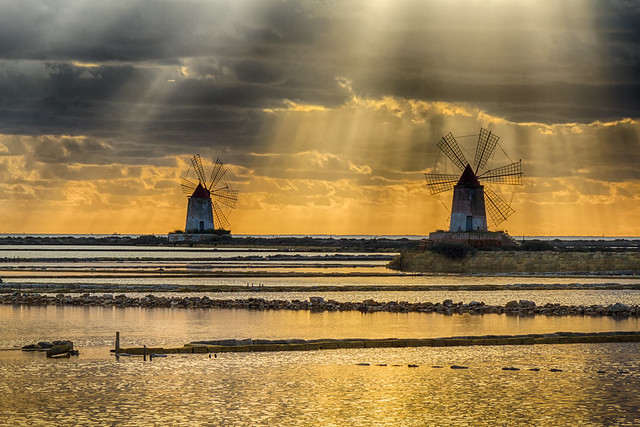 West of Trapani is the Monte Cofano Nature Reserve, where you can do different excursions and go trekking.
One just can’t speak of the natural wonders of Trapani and its surroundings without mentioning the beautiful and panoramic Erice, or the famous archipelago of the Egadi Islands, as well as the lovely Zingaro Nature Reserve and San Vito lo Capo, just about fifty minutes from the capital of province.

The sea and the beaches

Between San Vito lo Capo and the Monte Cofano Nature Reserve is the Baia Santa Margherita (Bay of Santa Margherita), full of coves that are less crowded than the beach of San Vito Lo Capo. Near the slopes of Monte Cofano, going through the Reserve, you will also find the beautiful Baia di Cornino (Cornino Bay).
The coastline of Castellamare del Golfo is another seaside resort area full of cliffs and coves with pebble or sand beaches. Among the most beautiful beaches in this area, there is Marinella, Petrolo, Marina Grande and the Plaja.

There are many culinary delights in Trapani, in particular, those related to street food. To discover an itinerary through the many delights of Trapani Street Food: Click Here.

The Trapani dish par excellence is without a doubt the fish couscous, delightful result of a merger between Arab tradition and local products.
In addition to this typical recipe of Trapani cuisine, you will find several symbolic first dishes including the busiate, sort of twisted macaroni using the buso (i.e. the stem of the ampelodesmus) often dressed with a garlic Trapani pesto, basil, fresh tomato, almonds and pecorino cheese; pasta with redfish ragù; the Frascatula (steamed semolina balls) often served with fish stock.

Also in the area of Trapani, among the most typical desserts are the genovesi di Erice (Genoese of Erice), made of pastry and custard and the "mustazzoli" always originating from the village of Erice.

Several sweet wines such as the Passito (raisin wine) and the Moscato DOC di Pantelleria or Marsala is produced in the province of Trapani, along with its variants Grillo and Perricone wines.