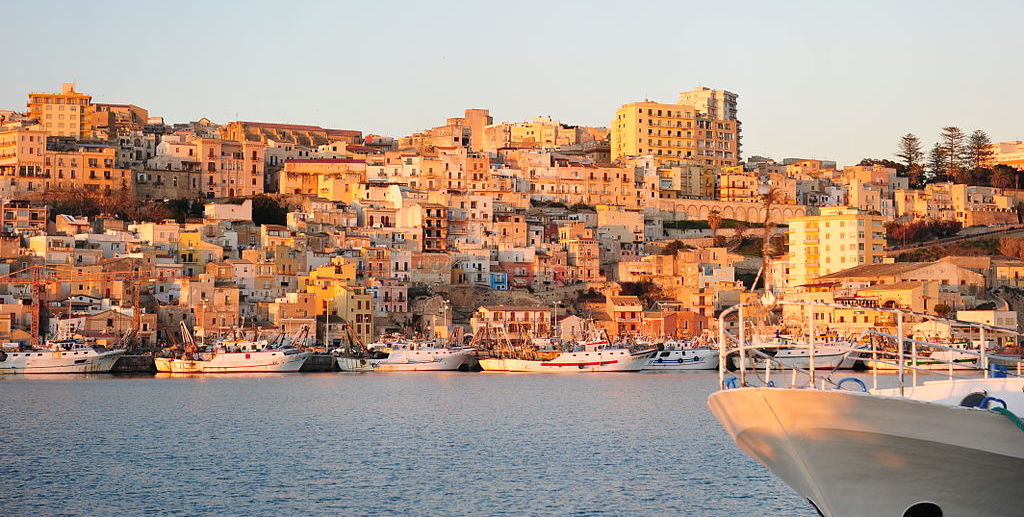 Located on the southwest coast of Sicily between Agrigento (60k) and Selinunte (36k), Sciacca (AG) is considered to be the oldest thermal center (natural spa) in Sicily.
Founded by the Ancient Greeks in the 7th Century B.C. as the thermal center of Selinunte, over time, thanks to the Arab and Norman conquests, it became an important cultural and economic hub. Built on a hilly territory which faces the sea, it offers its visitors spectacular views, particularly from Angelo Scadaliato Square situated like a terrace on the sea.
Sciacca is particularly suitable to visit during the summer in order to enjoy its beaches and sea, but also during the days of the famous Carnival of Sciacca, particularly on Shrove Thursday.

Useful information for your stay in Sciacca

How to reach Sciacca

Palermo Airport – Punta Raisi: flow the indications in the section “By road – from Palermo”
Trapani Airport – Birgi : Take the A29 highway, the state road (S.S.) 115 and exit at Sciacca.

The Lumia Bus company connects Sciacca in Caltanisetta, Agrigento, Caltabellotta, Castelvetrano, Marsala, Menfi, Trapani and other places in Sicily: See their Website
The connection between Sciacca and Roma is provided by the SAIS Transportation company: See their Website

Today Sciacca is a very attractive tourist destination, the city of Arab-Norman architecture, offers several historical monuments including the Luna Castle (built in 1380 by Guglielmo Peralta), the Perollo Castle (1067) which shows scenes of the bloody conflict between the homonymous families, and the “Enchanted Castle” decorated with numerous sculptures by the artist Filippo Bentivegna. Not to mention Steripinto Palace built in the typical Sicilian-Catalonian style of the sixteenth century.

Also worth mentioning are the Bell Tower, the Medieval Tower and the Tower of Pardo, as well as the three city gates which still exist named Porta Palermo, Porta San Salvatore and Porta San Calogero. While there visit the many churches and, in particular, the twelfth century Chiesa Maria SS del Soccorso, also known as the mother church, the Church of Santa Margherita, the Church of the Carmine and the Sanctuary of San Calogero. A few meters from the church, in Piazza Don Minzoni, is the Scaglione Museum which houses the works and artifacts collected by the Francesco Scaglione (Sciacca 1859 - Rome 1938).

Sciacca is a viable tourist destination for its beaches and shores, among the most beautiful we find: the lido of Stazzone, Lido Salus and the beaches of Tonnara and Foggia. Other seaside resorts nearby are Renella, San Marco and Maragani, frequented mainly for their breathtaking sea beds. To the west (along the road to Ribera) are the beach of Fornace, the Sovareto Beach, San Giorgio, San Giovanni Rotondo, Timpi Russi, Lumia and Macauda.

The thermal baths of Sciacca are among the most famous in Sicily for the therapeutic properties of their sulphurous waters but also for the unique Steam Caves found nowhere else in the world, called "S. Calogero’s Stoves" which are located on top of Mount Kronio, which legend says were discovered by Daedalus while fleeing from Crete.

In addition to the typical seafood of the area, Sciacca’s cuisine offers several unique savory dishes and sweets. The two most traditional sweets are the ova murina and the cucchiteddi, the first dating back to 1500 are stuffed with cream and were reserved only for the nobility; today they are certified by the Municipal Name (DE.CO.), the second were the sweets of the common people and are made with almonds and pumpkin jam.

In terms of savory specialties, we have instead the "tabisca saccense", a special pizza of the peasant tradition seasoned with onions, cheese, olives and anchovies and served on a traditional wooden board.
In the Sciacca area and the rest of the Province of Agrigento, “Sciacca Doc” produces a great variety of wines from whites to reds and lovely rosés.